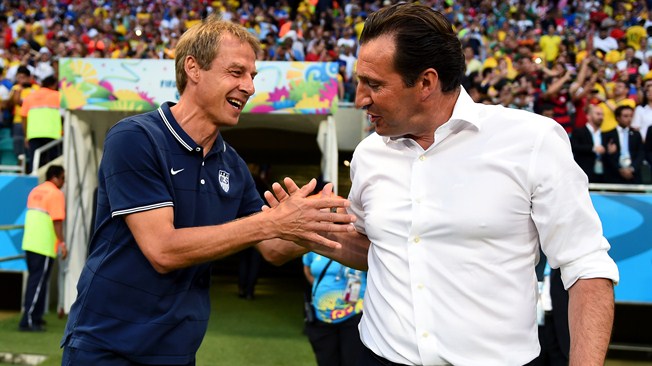 Marc Wilmots, Belgium coach
Tonight we’ve seen a forward-thinking Belgium team. We had 27 shots on goal, the first came after the second minute and we didn’t stop attacking for the remaining 118 minutes. I want to congratulate Jurgen Klinsmann and the USA team, especially Tim Howard who had a fantastic game and I think we deserved to win. We played football, we were brave and we pushed ourselves to the limits. Sometimes in games like that when you have so many chances and you are denied, the result doesn’t go your way but we didn’t stop believing. Now we have four days to prepare for the Argentina game, GCLUB which isn’t long. We’re not favourites but we want to win.

Jurgen Klinsmann, USA coach
It’s hard for us to end up on the losing side after 120 minutes of giving absolutely everything. But this game had everything, it was a thriller. I have to say that what Tim Howard did tonight was phenomenal, outstanding and amazing. He kept us in the game. He had an absolutely amazing match and you have to give him all the plaudits. That said had chances to equalise, but congratulations to Belgium. GCLUB, I’m proud of the players not just for what they’ve done tonight, but what they’ve done throughout the tournament. They’ve made the country proud. The sport in the USA will only continue to grow. It’s getting stronger and there’s a lot to build on going forward.

Tim Howard, USA goalkeeper and Budweiser Man of the Match
It’s heartbreaking, I don’t think we could have given any more. We left it all out there. We got beaten by a really good team. They took their chances well. It’s heartache, it hurts. But hats off to Belgium, they were fantastic.