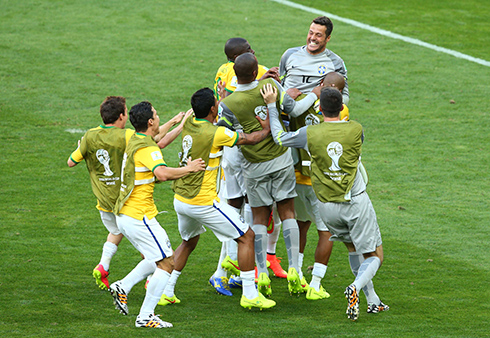 Queens Park Rangers goalkeeper Julio Cesar was the hero in the penalty shootout as Brazil reached the last eight of the FIFA World Cup with victory over Chile in Belo Horizonte.

Brazil, who also named Chelsea’s Oscar and Manchester City’s Fernandinho in the starting line-up, took the lead on 18 minutes when the former Chelsea defender David Luiz, with the help of Chile’s Gonzalo Jara, turned the ball into the net.

Chile came back into the contest and equalised 14 minutes later through Alexis Sanchez.
That is how the scoreline remained and, despite the introduction of Ramires in the second-half and Chelsea team-mate Willian in extra-time, the match went to a penalty shootout.

Cesar, who is on loan at Toronto in the MLS, saved from Mauricio Pinilla and Sanchez and after Neymar had fired home, Jara hit a post to spark wild celebrations for the hosts.

Southampton’s Gaston Ramirez and Liverpool’s Sebastian Coates are heading home from the World Cup after Uruguay lost to a James Rodriguez-inspired Colombia in Rio De Janeiro.
Ramirez came on as a 53rd-minute substitute but by then, Uruguay were 2-0 down after goals either side of half-time from Rodriguez, the first, a stunning turn on the volley that crashed off the underside of the bar before going in, while the second was the finish to a fine team move.

Colombia will meet Brazil in the quarter-finals on 4 July.