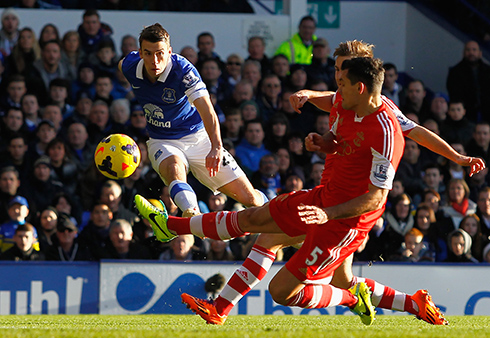 Seamus Coleman believes Everton are “going in the right places” after signing a new contract with the club.

The 25-year-old defender, who joined Everton from Sligo Rovers in January 2009, has signed a five-year deal – which will keep him at Goodison Park until 2019 – after an eye-catching season in the Barclays Premier League.

He made 36 League appearances, scoring six goals, as Everton claimed an impressive fifth-place finish in manager Roberto Martinez’s first season at the club with a club-record points haul in the Barclays Peremier League of 72 points. His performances earnt Coleman a place in the Professional Footballers’ Association Team of the Year for 2013/14.

“With how much I love playing at Everton, I was delighted to get the chance to sign another contract,” Coleman, Everton’s player of the season, told the club website. “I’ve been at Everton five years now and I love everything around the place. I love working with all the players, the staff, the coaching staff – everything. It was a very happy decision to make.

“With the manager and some of the players we have, we’re going to the right places.”

It is another piece of good news for Everton, for whom Martinez signed a new five-year contract this month and Coleman said that played a part in his decision to commit.
“He’s been brilliant for me, and it was a big reason to sign – how respected he is by all the players,” Coleman said of Martinez. “He is the type of manager who gives you confidence every week and I really enjoyed the confidence he was giving me last season. It allowed me to show my best performances really.

“But I’m not reflecting too much on last season. I’m more thinking about this season coming up now and getting ready to go again and trying to do as well again.”