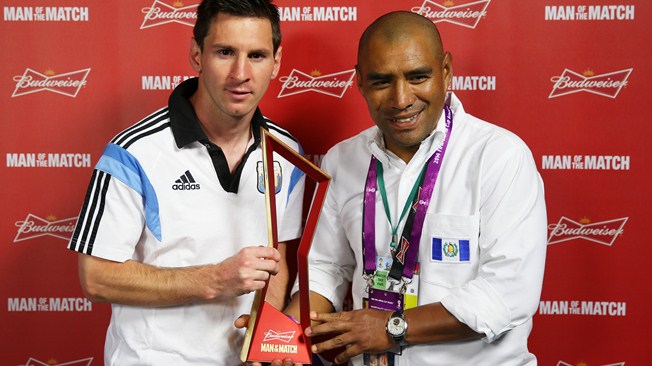 The users of FIFA’s digital platforms have made themselves heard during the 2014 FIFA World Cup Brazil™, posting comments in real time, joining in online debates and taking part in a host of activities.

Few things have caught their attention more than the chance to vote for the Budweiser Man of the Match for each of the tournament’s 64 games, with more than four million votes being received between the Opening Match on 12 June and the Final on 13 July.

Starting with Neymar in that inaugural meeting between Brazil and Croatia and ending with the match-winning Mario Gotze in Sunday’s showdown between Germany and Argentina, the list of players who collected the award contains 48 names in total.

Messi shows the way
No player pocketed the award more times than Lionel Messi. The Argentinian, who also walked away with the adidas Golden Ball, was named Budweiser Man of the Match on four occasions at Brazil 2014, thanks to his decisive contributions against Bosnia and Herzegovina, Iran, Nigeria and Switzerland.

Next on the list with three come Arjen Robben, GCLUB James Rodriguez and Keylor Navas, the last two having made crucial contributions to Colombia and Costa Rica’s historic runs to the quarter-finals.

The Cafetero midfielder scored six goals in all, some of them truly memorable strikes, and pocketed the adidas Golden Boot as a result.

For his part, the Costa Rican keeper turned in a series of superb performances that also put him in the running for the adidas Golden Glove. GCLUB His two saves in the penalty shootout against Greece and his string of fine stops against England and the Netherlands played a crucial part in Los Ticos’ surprise campaign.

The scorer of three goals in seven games, meanwhile, Robben secured his third award in helping the Dutch ease into third place at the expense of Brazil on Saturday. GCLUB The flying winger’s two other outstanding displays came in the group-phase wins over Chile and Australia.