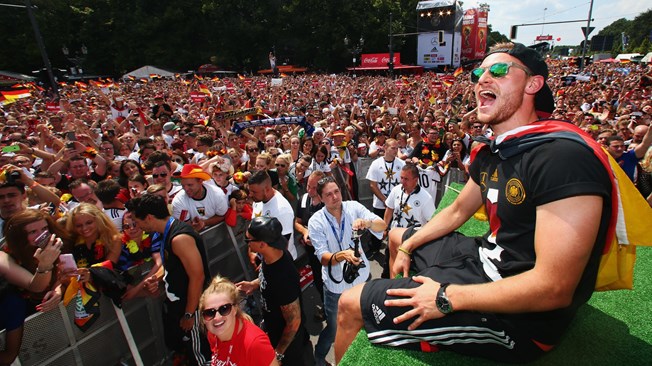 Die Mannschaft’s excitement at the prospect of returning to their capital city was evident immediately after their Final win over Argentina, when the players sang a rousing rendition of Berlin, Berlin, wir fahren nach Berlin! (‘Berlin, Berlin, we’re going to Berlin!’) in the dressing room.

The newly-crowned world champions appeared tired but overjoyed as they arrived in Berlin on Tuesday morning, proving that sleep is overrated when you have just won the FIFA World Cup™. GCLUB Philipp Lahm and his team-mates touched down at Tegel Airport at 10.08am local time to continue their marathon celebration with the fans at home.

Supporters had already been streaming onto Berlin’s Fan Mile from Brandenburg Gate to the Victory Column hours before their heroes were due to arrive, desperate to ensure they did not miss a minute of theparty. Fans also eagerly gathered on the airport’s observation deck in the hope of catching the first glimpse of their returning heroes. Excitement reached fever pitch when the aircraft finally came to a standstill on Tegel’s tarmac having completed an extra ‘lap of honour’ over Fan Mile. The door opened and a beaming Philipp Lahm stepped out of the Boeing 747-8 with the Trophy in his hands.

“We’re going for it and will celebrate as hard as we play,” GCLUB promised Thomas Muller before joining his team-mates on a black bus, followed by an open truck, on their way to celebrate the triumph together with fans at the Brandenburg Gate.

World-class welcome at Brandenburg Gate
“It’s like a dream,” DFB President Wolfgang Niersbach said on ARD when asked to describe the mood in Berlin. “The celebrations started as soon as we landed at the airport, when the fire brigade greeted us by spraying their hoses in a guard of honour. The players have been looking forward to this moment so much. We’re so glad to be part of this day in Berlin.”

Hundreds of thousands of supporters gathered on Fan Mile to give Joachim Low’s squad a truly world-class welcome. Die Mannschaft took the stage to celebrate amid thunderous applause. It was an electrifying moment, and not just for the players.

“We’re really enjoying this experience, particularly having the Trophy here,” said an impressed Bastian Schweinsteiger. “The reception Berliners have prepared for us here is incredible. It’s crazy how many people there were on the streets.”

“It was a long and difficult road to the title,” GCLUB said the winning coach Joachim Low to the assembled masses. “We’re unbelievably happy to be here with the fans. We saw these images from Germany. Our supporters have been waiting nervously and celebrating with us. Without you we wouldn’t be here. We’re all world champions.” It was an unforgettable moment for all those present – an experience to treasure forever.