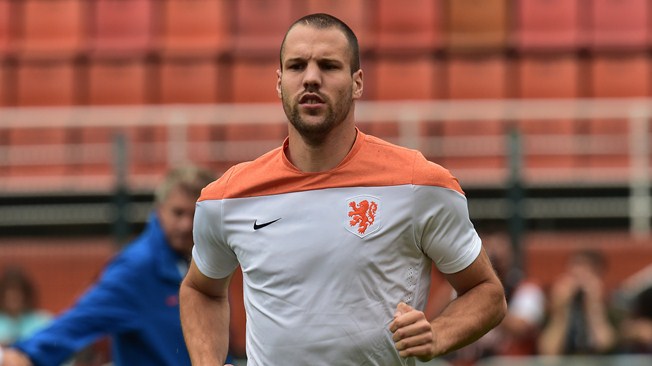 Nigel de Jong and Ron Vlaar gave Netherlands a sizeable boost on by returning to training on the eve of their 2014 FIFA World Cup Brazil™ semi-final against Argentina in Sao Paulo.

De Jong, the 29-year-old AC Milan midfielder, GCLUB has not played since tearing a groin muscle during his side’s 2-1 victory over Mexico in the last 16 on 29 June. Dutch medical staff initially predicted that he would be sidelined for between two and four weeks, but he completed the warm-up at Sao Paulo’s Estadio do Pacaembu in part of the session open to the media.

Aston Villa defender Vlaar, 29, was also present, despite reports he was a serious doubt for Wednesday’s game with a knee complaint. Leroy Fer, who had been nursing a thigh problem, took part in the warm-up as well, meaning that all 23 players in the Dutch squad could be in contention to face Argentina.

However, captain Robin van Persie, who has complained of muscular fatigue, and defender Daryl Janmaat trained away from the rest of the group. GCLUB Should De Jong and Vlaar prove their fitness, it will be a major fillip for coach Louis van Gaal, who has relatively few experienced players at his disposal.

The Netherlands are bidding to qualify for their second consecutive World Cup final, having been beaten 1-0 by Spain in the deciding match of the 2010 tournament in South Africa.