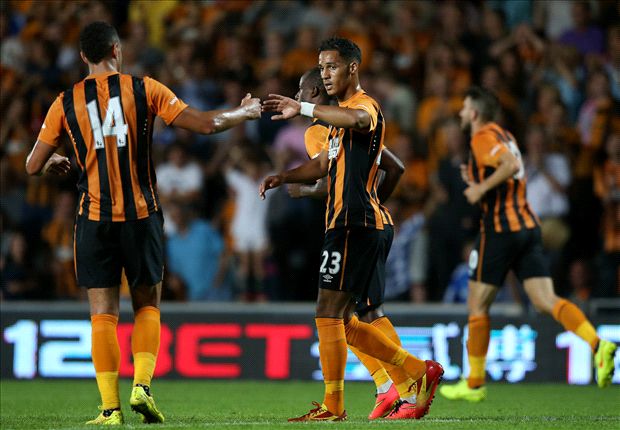 Hull City left it late as they came from behind to beat Trencin 2-1 and reach the Europa League play-offs.

Substitute Sone Aluko popped up to score the winner with just 10 minutes remaining at a packed KC Stadium.

In the FA Cup finalists’ first home European tie, which followed a goalless opening leg, Sbobet, they were stunned just two minutes in as Tomas Malec swept the Slovakian side ahead.

Shane Long wasted two good openings as Hull regained their stride prior to eventually hitting back through Ahmed Elmohamady’s header just before the half-hour.

Visiting goalkeeper Milos Volesak backed up a penalty save in the first leg to routinely frustrate the Premier League side but Hull ultimately prevailed.

Steve Bruce’s men displayed dogged determination to break down a well-organised Trencin side and will resume their European campaign after their first domestic game of the season at QPR on August 16.

Bruce had warned the visitors that his side would be sharper than they had been in their initial meeting but Hull failed to put that into practice as Frantisek Kubik was afforded space on the right and giant striker Malec swept home his cross to give Trencin a valuable away goal.

As Hull recovered from their sloppy start, Trencin’s first-leg hero, Volesak, Sbobet, again came to their rescue in the 15th minute as Long raced onto a Yannick Sagbo flick-on, only to be denied by the onrushing goalkeeper’s shoulder.

Long was again denied by Volesak after Robert Snodgrass’s scuff fell kindly but the hosts did not have to wait much longer to get back on level terms through Elmohamady. Robbie Brady played a neat one-two with Snodgrass on the left before curling a measured cross to the back post, where the Egyptian rose highest to plant the ball beyond Volesak’s reach.

Volesak denied Long for a third time 10 minutes before the break, somehow clawing the Irishman’s four-yard header away after a Snodgrass corner. The former West Brom man directed his frustrations at Dutch referee Bas Nijhuis a minute later and earned a booking.

A fruitless opening 10 minutes to the second half prompted Bruce to replace Brady with Liam Rosenior – Hull switching to 4-4-2 with the change – and the full-back’s first touch saw him go close to a sensational goal but his curled effort just drifted wide.

Elmohamady flashed a shot across the face of goal before Huddlestone lifted a well-struck 30-yarder over the crossbar.

Yet the home fans were sent into raptures when Aluko slammed home after Snodgrass had done well to turn Elmohamady’s deep cross into a dangerous area.

Brazilian defender Ramon lashed a stoppage-time free kick just wide for Trencin but Hull held on to reach the play-offs, where they will be seeded, as they aim for the group stages on their European bow.