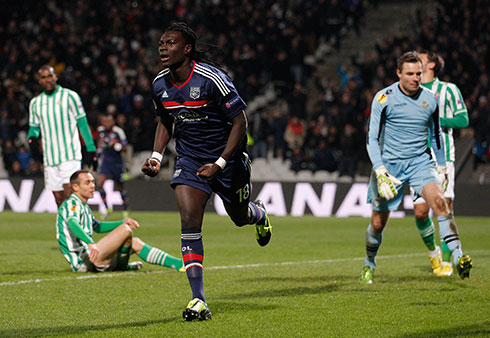 Swansea City have announced the signing of Bafetimbi Gomis, subject to international clearance.

The 28-year-old striker has joined Swansea on a free transfer from Lyon after signing a four-year contract. Gomis, who has been capped 12 times by France, scored 22 goals last season for the French club.

He is the second signing of the summer transfer window by Swansea’s new permanent manager Garry Monk after the acquisition, also on a free transfer, of goalkeeper Lukasz Fabianski from Arsenal.

Gomis said it was the Welsh club’s persistence in seeking his transfer that helped to persuade him to move there.
“I’ve been really impressed speaking with the manager and the chairman over the last few days,’’ Gomis told the Swansea website. “They showed they really wanted me – and that’s one of the main reasons I chose Swansea ahead of the other interested clubs.

“They’ve been trying for over a year to sign me. It didn’t quite happen back then, but they kept trying and I’m absolutely delighted to be here now. Although I’ve been aware of Swansea for a number of seasons, I’ve been following them a lot closer since the interest first materialised last year.

“It’s a proud club with strong philosophies. It is growing all the time and I’m honoured to be given the opportunity to be part of it. I watched a number of games last season and I think the style will suit me. It’s a collective, passing approach which I like. The way the team play creates lots of chances for the striker and hopefully I can score plenty of goals.’’

Gomis is excited at the prospect of working alongside Wilfried Bony, the Ivory Coast forward who scored 16 Barclays Premier League goals in his first season at Swansea.

“I do not see Wilfried Bony as competition, more of an association, because I know we can also play perfectly together,’’ Gomis said. “We can benefit each other and that will be strong for the team.’’